‘Enlarging the place of your tent’
in the COVID-19 exile

Christians know well several of the promises found in Isaiah 54 because the words are present in many songs and hymns that we sing. Three verses which are often quoted and often sung speak to the hope and confidence that can be found by all those who put their faith in the Lord.

2  “Enlarge the place of your tent, stretch your tent curtains wide, do not hold back; lengthen your cords, strengthen your stakes.

10  Though the mountains be shaken and the hills be removed, yet my unfailing love for you will not be shaken nor my covenant of peace be removed,” says the Lord, who has compassion on you.

17  ... no weapon forged against you will prevail, and you will refute every tongue that accuses you.

The bigger story behind these promises makes them even more powerful. The context of God’s blessing to Israel was given to them during their exile in Bablylon, where they lived in shame and hardship. They had been separated from their inheritance. They had been separated from God’s goodness. The blessings of Isaiah 54 were not anticipated by this broken and isolated people. They were beyond what they could hope or imagine. These blessings have grounded the courageous and faithful actions of many Christians through the century. 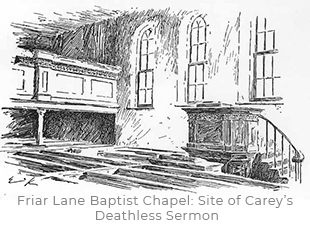 In May 1792 William Carey preached in Nottingham what became known as the ‘Deathless Sermon’ based on the Isaiah passage. Everyone present recalled its stunning impact. The first voluntary association in support of global missions was soon formed in the worst of economic times. The following January 1793, five colleagues gathered to commit themselves to supporting Carey’s mission: John Ryland, John Sutcliffe, Samuel Pearce, Andrew Fuller and William Carey. They promised to support the work without ceasing—Fuller called it the ‘rope-holding pledge.’ He recalled it was Carey’s words that recalled those of Isaiah: “Well, I will go down, if you will hold the rope.” Before Carey descended, as it seemed to Andrew Fuller, he took an oath from each of us at the mouth of the pit to this effect that “whilst we lived, we should never let go the rope.” The sermon did not die and the challenge has been picked up in succeeding generations. God’s Word is powerful!

In the barren, lonely, isolated, impoverished and mourning world of COVID-19, it seems as if the whole world is in exile as we are removed from physical contact with the people that we love. In this broken world, the Lord’s promises can ring loudly once again. As we love and serve those around us, let us confess the truth that His unfailing love for us will not be shaken. Let us believe that we can prevail in trying circumstances. Let us trust once more with William Carey that God has plans to ‘expand our tent’ even as we lengthen the cords and strengthen the stakes.

IN MEMORY OF DAVID HOLTEN

GET A TUITION-FREE START TO YOUR SEMINARY JOURNEY

This limited time tuition-free start offer is for the Fall 2021 term and includes a full tuition waiver on the first three courses taken for credit within the 2021-2022 academic year.